Mother Monster tells the crowd at her show on Monday that her fans are ‘the best birthday present you could give me.’
By Kara Warner

LOS ANGELES — A Lady Gaga concert is unlike any other live music event for two reasons: First, Mother Monster obviously puts on one helluva show — passionate, energetic, etc. — and second, there’s the amount of effort her most dedicated fans, the Little Monsters, put into their unbelievable, outrageous and scandalous ensembles. Braving the teeming masses in the floor section of a Gaga concert is like being dropped in the midst of a half-naked, sparkly, Lycra-filled Halloween parade.

So was the scene on Monday night at the Staples Center, where Gaga shared her blood, sweat and tears with the nearly 20,000 screaming audience members … on her 25th birthday, no less.

“I’m going to kick your ass tonight!” Gaga declared after her opening number, “Dancing in the Dark,” and at the start of “Just Dance.” She challenged the crowd to stay on their feet and to be themselves, which became the theme of the evening.

“The Monster Ball will set you free,” she said during a beat between “Just Dance” and “Fame.” “You can be whoever you want to be.”

Naturally, the crowd ate up every word Gaga spoke, particularly her words of encouragement and love for her fans.

“Thank you for the best birthday present you could give me,” she said, indicating that the present was her fans themselves. “Thank you for still buying tickets to my show. Thank you for believing in my music.”

And in between the heartfelt thanks, the Lady left room for joking around. She told the crowd that her dad had advised her to be extra careful during her birthday performance because her fans will throw gifts up onstage. “He said, ‘Please be careful what you put in your mouth.’ ” Also, when one concertgoer indicated that they had brought her Nutella, she said she had to politely “rebuke” the gift because she had to prep for the “Judas” video.

Besides Gaga’s words of wisdom and heartfelt thanks, of course, there was plenty of her chart-topping music. The major highlights of the show — in addition to a rousing “Happy Birthday” sung by the crowd toward the end of the evening — included “Born This Way,” which Gaga performed twice: the first, a stripped-down version she delivered at the piano and accompanied with an inspiring story regarding a long-desired pair of ruby slippers and dreams that really do come true (“Someday someone will hand you a pair of ruby slippers!”); the second, her show-stopping second encore. Also very worthy of a mention were “Alejandro” — the choreography performed by Gaga’s extremely talented and acrobatic core of dancers was incredible — the new ballad “You and I” and the always-killer “Bad Romance.”

Do you have belated birthday wishes for Lady Gaga? Share them in the comments.

Singer and former ‘Dawson’s Creek’ star battle it out in her new music video.
By Jocelyn Vena

Ke$ha in her video for “Blow”
Photo: RCA

Ke$ha’s new music video for her song “Blow” opens with this disclaimer: “No mythological creatures were harmed in the making of this video.”

Looking glossy and glam in her one-shoulder dress, she tells two unicorns, “I grabbed the bear by the throat, looked him right in the eyes and said, ‘Bear you have until the count of zero to put some pants on and apologize to the president. And that’s the story of how I was elected to the parliament of Uzbekistan.”

She then giggles as she looks into the camera, telling viewers to “dance.” Soon, she locks eyes with Van Der Beek. Ke$ha and Van Der Beek exchange glances as they make their way through the party. Scenes of their longing (and unicorns dancing with one another) are edited with scenes of Ke$ha, in a bodysuit, mugging for the camera, singing the song and kissing more unicorns.

Van Der Beek begins stripping off his suit jacket and dances his way towards the singer, who then pulls off her bra from under her gown. He follows suit, leaving viewers laughing and Ke$ha understandably perplexed about why he wears a bra under his dress shirt.

After snipping at one another and trading barbs, they begin shooting lasers at one another in a battle sequence, knocking down and killing rainbow-shooting unicorns in the process. In the end, it’s revealed that Ke$ha has killed the actor and mounted his head on her wall, laughing off the encounter. The plaque in which his head is displayed reads “James Van Der Dead.”

What do you think of the new Ke$ha video? Tell us in the comments!

‘Being a mother with three children suddenly when you’re young is quite a big [change],’ she tells MTV News at DVD premiere.
By Kara Warner, with reporting by Josh Horowitz

At the DVD premiere, we asked actress Bonnie Wright about the experience filming the franchise’s highly anticipated “epilogue” sequence, in which all the characters appear as themselves, only 19 years in the future.

“It was really weird,” Wright said of seeing herself in makeup made to look like a woman in her 30s. “People said, ‘Don’t worry, you look good for 35!’ ”

Wright said the experience was a lot of fun, mostly because she had to embody a completely new aspect of her character, Ginny Weasley-Potter.

“Being a mother with three children suddenly when you’re young is quite a big [change],” she said. “It’s strange, because obviously [when] I started, my first scene ever filmed was on the train platform 9 3/4, and then we came back to shoot some more before Christmas, and it was back at platform 9 3/4, so I finished, and it was like this amazing cycle.”

Regarding the scenes she’s most looking forward to seeing in the final film, Wright said she’s pumped to see the final battle.

“I think I’m mainly looking forward to the epic battle that is to come,” she said. “See[ing] the power of good triumph over evil is going to be satisfying.”

Check out everything we’ve got on “Harry Potter and the Deathly Hallows, Part 2.”

For young Hollywood news, fashion and “Twilight” updates around the clock, visit HollywoodCrush.MTV.com. 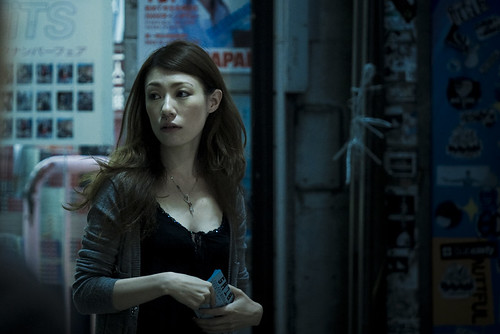